Posted on August 26, 2007 by barbara
Recently, my sister emailed me a funny picture. She said that the picture reminds her of me and other mommies who are doing paid posts. I had a good laugh too when I saw it. Muahahaahha….I so wish that everything is just within reach so that I don’t have to get up from the chair 😀 I wonder if this mommy would agree with me? 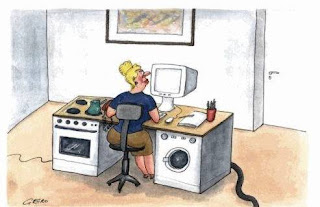 Soup is the best

Posted on August 26, 2007 by barbara
Ashley loves to drink soups. If she knows that we have cooked some soup for her, she would refuse to eat other things and kept asking for the soup. Therefore, I only give her the soup once she had finished her lunch or dinner 😀 Bad mommy eh? The kind that she likes are ABC soup, Miso soup, Herbal soup, etc. I have yet to let her try the ‘English’ soups like Creamy Mushroom, etc. Below is the yummy lotus root with wolfberries. This is also one of my favourites. I’m surprised that Ashley also likes to eat the lotus root 😀 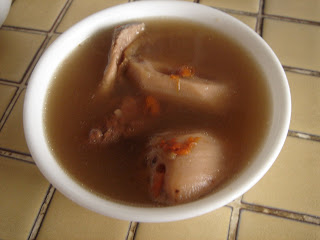 Posted on August 26, 2007 by barbara
Since my mom is here, my hubby and I left Ashley in her care and both of us went out today. Just where did we go? Petaling Street, of course ;D Not my favourite place but I want to check out THE bag which I mentioned earlier. Yes, they have the bag and it does look a lot like the original. Though I have only seen the original bag online, I could somehow guess how the actual one looks like ;D At Petaling Street, the bags come in 2 sizes. The canvas bag is white but the letterings and trimmings are in 4 colours such as the original brown, pink, blue and green. Of course the best is the brown letterings. The interesting part is the price of the bag. I approached the first stall I saw and they quoted me RM110. The guy told me it was the best price 🙂 Then I went to the 2nd stall and the price was RM75. Next stall quoted me RM65. So, did I get the bag? Yes, I bought it for my sister at RM50 after much bargaining. I forgot to snap a photo of the bag *slaps forehead*.
Posted in Uncategorized | 4 Comments

Posted on August 25, 2007 by barbara
Tomorrow is the fourteenth day of the seventh lunar month. If you are Chinese, you would know that the seventh lunar month is the Ghost month and tomorrow is the Ghost Day aka the Chinese Halloween ;D Many people will be busy preparing food offerings to the spirits of the visiting ancestors. My mother-in-law is one of them. So, tomorrow, we will be heading over to her place as she’ll be cooking up a storm. There goes my diet ;D
Posted in Uncategorized | 2 Comments

8 Random Tags About My Mum

Wow..this is the first time I’m doing a tag on someone else. Lovely Mummy would like to know about my mum so, here it goes –

1. My mum is 65 year old
2. She experienced the greatest pain when she gave birth to me. I’m her firstborn and was overdue.
3. My mum worked full-time for over 20 years and at the same time took care of her 3 children single-handedly
4. She is quite a vainpot ;D
5. My mum loves to go to the market and pasar malam
6. She loves to dye her hair
7. My mum is very creative.
8. She loves her only grandchild to bits ;D

Posted on August 24, 2007 by barbara
Yippee…my mum arrived today. She went to Ipoh last week and came back to KL today. My mum will be staying for a week or so. The last time she stayed over was about a month ago. Ashley will have someone to play with and take her out for walks again. She was so happy to see her por por today and she kept jumping up and down 😀 At least for the next few days, I can have some ‘Me’ time and also get to work more on my computer.
Posted in Uncategorized | 2 Comments

Posted on August 24, 2007 by barbara
Normally when my ‘CNN’ network buddy received offers from this particular advertiser, she would sms me and asked me to check my account. Unfortunately, I haven’t been getting any from them. Could it be an error in the system? So, this morning I decided to send an email to this advertiser informing them that I have not been receiving any offers from them for a week. To my surprise, their support replied immediately and asked me to do a test run in my account. Then a few hours later, I received another email from them, informing me that they have released some offers about 4 hours ago and they have reserved some for me. I quickly checked my account and was ecstatic to see the offers. Now, isn’t that nice of them? 😀
Posted in Uncategorized | 2 Comments

Posted on August 23, 2007 by barbara
Today is our weekly visit to my dad’s office. As usual, Ashley had a fun time at kung kung’s office. Riding her bike, climbing up and down the sofa, asking kung kung to vacate his seat so that she could sit on it and play with all his pens *slaps forehead*. After we left my dad’s office, we went to One Utama for dinner. Mom’s Care is having a sale and there are lots of good bargains for baby stuff like clothing, stroller and car seat. Wanted to get Ashley a belt but couldn’t find any her size.
I went into Forever 21 but almost got lost seeing all those funky clothes and accessories. I seem to have trouble looking for clothes as there are so many things everywhere 😀 Just how do people shop in Forever 21? Then I hopped over to Gap and to my surprise, they are having a sale too. Some clothes and bags are 50% off. Unfortunately, I didn’t buy anything there as Ashley was being naughty and won’t let me shop in peace. Gotta go there again without her 😀 We arrived home around 8.30pm. A rather long and busy day.
Posted in Uncategorized | 3 Comments

Posted on August 22, 2007 by barbara
I have a friend whose daughter is 3 months older than Ashley. We haven’t met for a long time but would chat on the phone once every few months. Yesterday, she called and our conversations were mostly about our daughters. When she found out that Ashley was still wearing diapers, all hell break loose. She said her daughter has stopped wearing diapers when she was 16 months and she is such a clever girl, blah blah, blah…. She kept saying that it was her daughter who wanted to stop wearing diaper because she kept removing it by herself. She went on and on about how smart her daughter is who keeps waking up in the middle of the night to pee in the potty, etc, etc, etc. Well, good for her but she kept repeating this, “Oh, Ashley is STILL wearing diapers”. I really felt like hanging up the phone yesterday. What is it with these people eh? 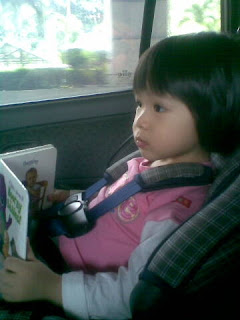 Ashley reading her favourite Barney book in the car

I owe a few people some tags but I really can’t remember them 🙁 Very sorry. If you have tagged me and I haven’t done it, please remind me, ok? This latest one is by Jayden’s mommy 😀 This is my one word tag –

Where is your cell phone? Next to me
Relationship? With my cell phone? Owner and phone.
Your hair? Ugly
Work? 24 hours a day
Your sister? What about them?
Your favorite thing? My laptop
Your dream last night? I can’t remember
Your favorite drink? Coffee ;D
Your dream car? SLK compressor
The room you’re in? living room
Your shoes? not wearing any
Your fears? lizards
What do you want to be in 10 years? happy
Who did you hang out with this weekend? my friend, Elly and her son, Mika
What are you not good at? maths
Muffin? Yummy
One of your wish list items? no children suffering in the world
Where you grew up? Ipoh
Last thing you did? typed Ipoh
What are you wearing? shorts and tshirt
What aren’t you wearing? who wants to know?
Your pet? Tyson the rottie
Your computer? Compaq
Your life? so so
Your mood? rather cranky
Missing? my friends
What are you thinking about right now? my friends
Your car? a korean car
Your kitchen? too small
Your summer? all year long
Your favorite color? black
Last time you laughed? a while ago
Last time you cried? can’t remember
School? i miss it
Love? my family

Well, not tagging anyone too.