eskişehir escort düzce escort nazilli escort manisa escort erzincan escort trabzon escort
Ever since she became sick about a week ago, lil’ missy has been throwing tantrums a lot. Lunch and dinner time are the worst. She would scream while sitting in the highchair and eating her food. This, of course will make her cough like crazy and she would start to vomit.
When we take her out to the mall and she sees other children with balloons, she would want one and start to get whiny and scream. *Sigh* All these screaming are driving me nuts. I have explained to her and even scolded her but she still does the same thing. What we do is just ignore her and kept walking. People would stare at us as if we just tortured our kid.
I wish she would stop doing it soon because it’s a pain whenever we go out. Just how do you deal with stuff like this?
In my previous post, I have taken Ashley’s photo when she was lying on the floor, on top of her Barney. Yvonne commented that she looked like she was in pain. LOL. Ashley was actually smiling in that photo. Each time when we ask her to smile for the camera, she would either lunged towards it or she would do this – 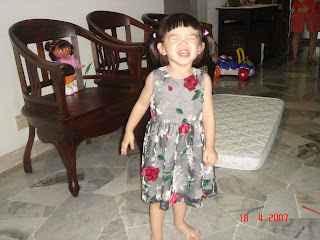 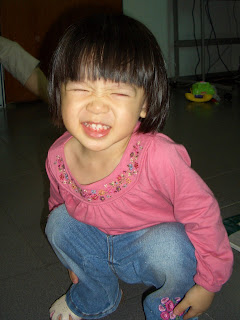 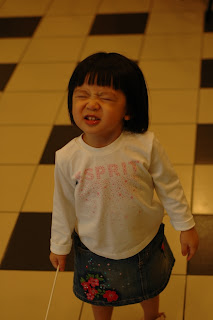 Yes and the baby is mine. I want to blog about this so that I can show Ashley when she is older just how naughty she is 😀

When Ashley was born, she started taking 2 oz of milk every 2 hours. Then it increased to 3oz after her full moon. On the 3rd month, she suddenly drank only 1 oz. I became frantic and tried to make her finish her milk but she just kept on crying. I also cried with her. We took her to see the paed and she advised me to feed her only after 3 1/2 hours. After a few attempts, she finished the milk. The following month, the same thing happened and I tried to coax her to finish her milk by singing to her. She managed to finish it and from then on, I have to sing to her all the time just so that she would finish it.

When she reached 9 months old, she just stopped drinking milk completely. NO amount of coaxing helped. I changed to soy milk, changed the milk bottles and teats, used sippy cup, etc but nothing will make her drink her milk. Finally, we found a way. Spoonfeeding. Oh, it’s not as easy as that. She would only drink when she is watching advertisements. I began to tape all the advertisements for her and play them when it’s time for Ashley to drink her milk. Now, she drinks (spoonfed) 8 oz of milk, 3 times a day! People will think I’m crazy to do this but that’s the only way to get her to drink her milk. I have been doing it for the past 1 year now. On and off, I would give her the sippy cup with milk but she will not take it.

Whenever we go out, Ashley will not be able to drink her milk as No Advertisements = No Milk. As a replacement, I’ll give her cheese and jar food. This is a major problem that we, or rather I am facing because I take care of her full-time 🙁 It is very stressful indeed! I wonder when all these would stop and she’ll drink milk just like a normal kid. Oh and she doesn’t like to drink water too.

I guess I’m still lucky compared to my friend, Priscillia. Her daughter will be turning 2 next month and ever since she was born, she doesn’t like milk. She only took 5 oz of milk for 1 whole day! Now her daughter doesn’t like to eat anything except bread. I can imagine the amount of stress Priscillia is facing. It is really tough being a parent. 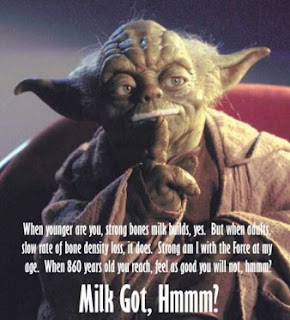 Ashley is getting better. Her fever has subsided after 2 days. Had no choice but to give her a 3-day antibiotics. She still has runny nose and cough though. Ashley has been throwing up each time she takes her milk or food because the phlegm irritates her. It’s hard to see her throwing up all the time 🙁 Since she doesn’t want to take her medication, I put all the mixtures in her milk. So each time she throws up, I start to worry about how much medication has entered her body.
This morning when she woke up, she saw a picture of a duck on her sweater. Then she said “quack quack quack” and started to flap her arms, imitating the duck while jumping on the bed. I’m glad to see that as it means she IS getting better 😀 (No, I didn’t manage to take a photo or video of her doing that). 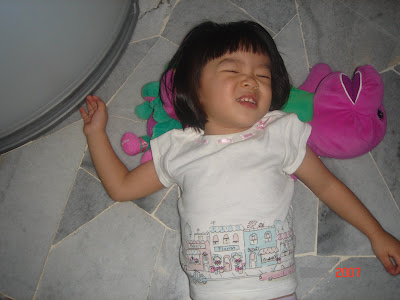 My little girl is sick. She has fever, cough and cold. 3 in 1. Sigh…We took her to the paed yesterday evening and it was nightmare for her. She is so paranoid about seeing a doctor ever since her eye surgery.

When we arrived at the clinic, the paed was not in yet and we were number 3 on the list. Hubby took her for a walk around that area so that she didn’t need to stay too long inside the clinic. When it was almost her turn, I asked hubby to bring her in and she was ok for a while when she saw the slides and the toys. As soon as the nurse called her name, she started to run away and cried. Had to grab her and took her inside. While the doctor was checking her, she screamed and kicked 🙁 It was over in 5 minutes and I had to send her out to hubby who was waiting outside so that I could talk to the paed. Every trip to the clinic is really stressful for all of us.

Getting her to take her medication is very difficult now. Her fever came back around 4am this morning and I had to force feed her the medicine while hubby held her down. Now Ashley’s voice is like an old woman. Luckily she is pretty active eventhough she’s not well. There were so many sick kids at the clinic. It must be the weather. Hope my baby will get well soon.

From the title, I’m sure you know what I’m going to talk about 🙂 Does anyone buy Pampers Comfort for their children? I have a problem with this diaper and would like to know if anyone else faces this problem. Recently, I left a comment in Mom2Ashley post about my daughter taking off her diaper and running around b*ttnaked. I thought she’s ready to be potty trained 😀 Silly me! Now I know why. The top part of the diaper scratches her tummy and she feels so uncomfortable wearing it. Also, the sticky tape does not hold properly.

Ashley uses 5 pieces of diapers everyday. Huggies during the day and Mamypoko when she goes to bed at night. I normally change her diaper every 3 to 3 1/2 hours. However, after she has her dinner and just before she goes to bed, which is about 2 hours apart, I let her use Pampers Comfort as it’s cheaper than the 2 brands mentioned. It cost about RM28 for 72 pieces of Large size. I still have half a bag to go and for sure I’m not going to buy this brand again. Any recommendations on what is good and economical?

I’ve been tagged again and this one I must do first because she‘ll whack me if I don’t. Believe me, she WILL because I’ve known her for more than 20 years and I know that she is ‘garang’. LOL. I’ve been a silent reader of her blogs for many years but only started leaving comments lately 😉

So, she wants to know who my fans, or rather my friends are. Well, it’s almost a year since I started blogging and it has been wonderful so far. I got to know so many lovely mommies. We also share happy and sad moments together 🙂 Mommies who visit my blog often are :-

4) LaundryAmah – Mummy to Kieran, the boy who loves Cartoon Network and Kylie the tough cookie

5) Sasha – Mummy to Jayden boy who loves to eat

Also, last but not least, my sisters and my good friend, WP, who are not bloggers ;). So, if you see your name up there, please do this tag, alright? Please, please?

Hey, the above names don’t mean that other mommies don’t read my blog. Just that I want to save some names for my other tag which is coming up soon. MUAHAHAHAHA!!!

Yayyyy….It comes with 2 baskets and mommy said I can put Barney and Babybop in them and they can ride with me. I guess for now, I’ll just take my balloon for a ride.
Thank you very muchie, kung kung! I promise I won’t pinch you anymore ;D
My mom dropped by today for a visit and after Ashley has taken her bath, she took her to the playground at our condo. When my mom reached the playground, she saw a lady playing with her grandson who is about Ashley’s age. My mom walked over to the slides as Ashley wanted to play with it.
Suddenly, this lady walked over and said, “Aiyo….your grandchild is STILL wearing diapers ah?” “You haven’t potty trained her yet?” “I trained my grandson when he was 4 months old“. Of course, my mother was taken aback because she doesn’t know this woman and she had the nerve to walk over and make comments like that. My mother just ignored her and continue playing with Ashley. After seeing no response from my mother, she walked away with her grandson.
If I happened to be there, of course I would tell her off. I just can’t stand people like that. Damn annoying!

Today is the actual day of Ashley’s birthday. Just want to wish her

Eventhough you are a little older, you will always be our little one 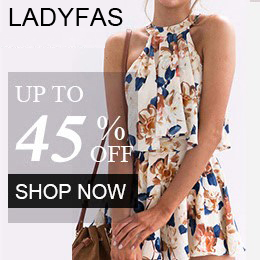