Posted on November 10, 2006 by barbara
We celebrated my mother-in-law’s 70th birthday last weekend at Eric’s Deli Paradise Restaurant in Plaza Damas. It’s a restaurant owned by Eric Tsang, the Hong Kong star together with a few other actors. Ashley was so happy to see Eric’s huge photo at the entrance. She is a great fan of The Super Trio. Ashley kept smiling and waving at him. I think she tried to talk to him too as she was talking in her baby language.

There were five of us (hubby, Ashley, MIL, my mum and myself) but we only ordered a two-person set of spare ribs soup steamboat as my MIL and mum are not big eaters. Hubby also ordered a special steamed chicken and claypot seafood vege. I don’t quite like the steamboat as there was no “Chilli” sauce at that restaurant. At other steamboat restaurants, they always have their special chilli sauce to go with the food. I guess Hong Kong style is different. We have tried their set dinners before and it was not bad. Also value for money. 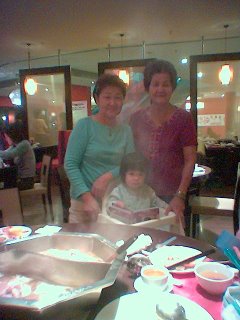 As usual, Ashley was cranky because she didn’t get much sleep. She was whiny when I feed her porridge and kept wanting to go down and walk. I was getting very impatient and almost screamed at her. My mum quickly whisked her away and let her run about at the mall. After that I managed to eat but since my blood pressure has already gone up, I didn’t really enjoy the food 🙁 It’s always the case whenever I have to feed Ashley her dinner outside. Ever since I had her, I have been gulping down my food. Normally, hubby would eat first while I feed Ashley and at the same time, I try to entertain her with her books or things that are not breakable like plastic spoons, etc. When she is done, hubby will try to keep her occupied while I eat the cold food. Since she can’t sit still for long, I have to eat with lightning speed.

Bought a Chantilly fruit cake at Sans Terri for my MIL but only ate it at home because everyone was already full. We left the restaurant around 8.30pm and sent my mum home. MIL stayed over at our place for a couple of days after that. The above photo is not very clear as I took it with my handphone. Left the camera at home (slap forehead).

This entry was posted in Uncategorized. Bookmark the permalink.