Posted on July 1, 2007 by barbara
Whenever we go to the mall, we always strap Ashley on her stroller. She’s not allowed to come down and walk around as she would go berserk 😀 She would be running around and touching everything that is on display and worse, she won’t allow any of us to hold her hands. Of course, when she is on the stroller, she won’t let us go into the clothing stores. Guess there are pros and cons 😀
Most of the time, we also try to steer clear of the rides in the mall. However, it’s not that easy sometimes because she could spot them a mile away. When that happens, she would want to sit on the rides or else she would start whining and screaming. Hubby and I will ignore her and after a while, she’ll be quiet. That’s not the case with her grandmother. This is what happens – 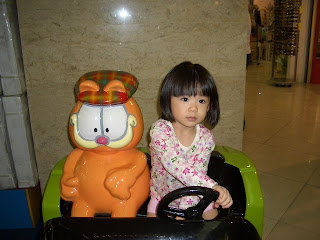 Mommy…look who I’ve picked up 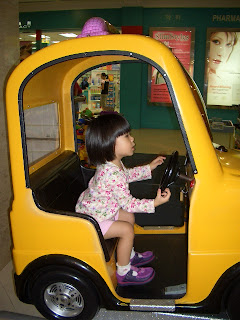 Who says I need a driver’s license?
Her poh-poh couldn’t bear to see her whining so she gets to do what she wants *shake head*. After the rides, she won’t want to sit in her stroller anymore.
This entry was posted in Uncategorized. Bookmark the permalink.

5 Responses to The Rides.