Posted on November 22, 2006 by barbara
Ashley attended her first birthday party last Friday. It was Mika kor-kor’s 5th birthday party at Pizza Uno, Ampang. Mika’s mummy decorated the place with lovely balloons and banners. There were colourful hats and party bags for all the children. Mika’s mummy even made a pinata and filled it with M&Ms, Toblerone and SunMaid Raisins which are Ashley’s favourite. Hmm…maybe I should ask Mika’s mummy to make a pinata for Ashley next time 😀 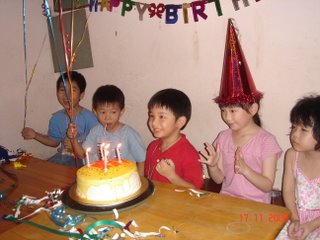 Mika (in red) with his cousins 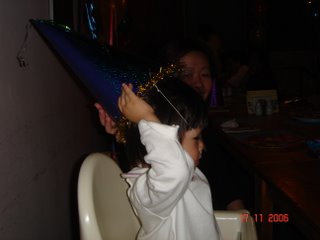 Ashley trying on the party hat 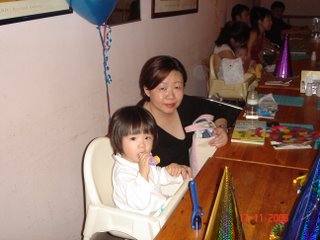 Ashley was so happy to see the children. She had a fun time playing with the balloons. The food was yummylicious! I had creamy mushroom pasta and hubby had the fried chicken. I still don’t know why he ordered fried chicken when Pizza Uno is famous for pizza and pasta 🙂 I fed Ashley some of the pasta and she loved it. Mika’s birthday cake was the heavenly Mango Delight. We had a nice time and I’m so glad to see Ashley enjoying herself. She must have tired herself up by walking around and slept all the way home.

This entry was posted in Uncategorized. Bookmark the permalink.

Leave a Reply to Mommy to Chumsy Cancel reply