Memorable Scene From Crash Landing On You K-Drama

Are you a K-drama fan?  If you are, I am pretty sure that you have watched the highly popular Crash Landing On You which stars Hyun Bin and Son Ye Jin.  I have watched this drama like 6 times.  Yes, I am crazy like that because I can’t seem to get over those swoon-worthy scenes.   This is the first K-drama I have watched.  It was during the first lockdown back in March 2o20 that I spent my days binge-watching it.  Right after my first K-drama, there was no turning back.  I have been ‘Kimchified’.

Ok, back to Crash Landing On You.  There was one scene where Yoon Se-Ri was talking to the soldiers in Rhi Jeong Yeok Shi’s house and couldn’t stop munching on a snack.  According to the subtitles, that snack is Scorched Rice with Sugar and it is called Nurungji in Korean.   Yoon Se-Ri said those snacks were addictive.  Nurungji is crunchy and the texture is like crackers. Below is the scene of Yoon Se-Ri tearing out small pieces of nurungji and munching them. 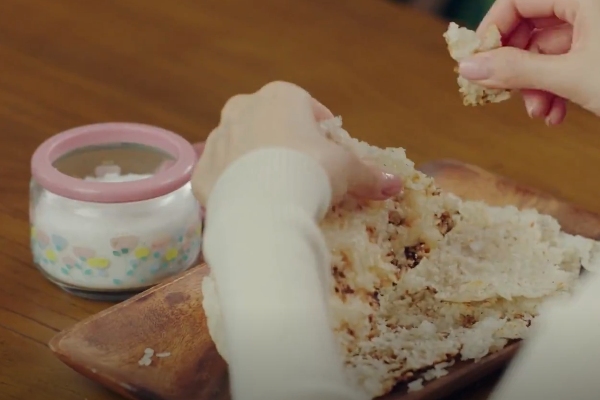 So one weekend when I was in Freshan, a Korean Mart at 163 Retail Park, I was thrilled to see the scorched rice for sale.   Seeing it brought me back to that special scene in Crash Landing On You.  However, I was taken aback at the price.  Can you see it?

The packet of scorched rice cost a whopping RM77.40.  Geez, I could have a rack of ribs for that price.  Pretty insane right?  Well, it’s good to know that imported scorched rice ain’t cheap.  I guess we can always make our own and you can actually get scorched rice from Claypot chicken rice *chuckle*.

This entry was posted in entertainment, food, funny. Bookmark the permalink.